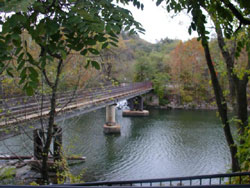 About the Trail
NVRC’s Role

The National Trail System (NTS) was established through enactment of the National Trail System Act of 1968 (82 Stat. 919, Public Law 90-543) (the Act). The legislation also authorized "feasibility studies" for additional components of the National Trails System, including the Potomac Heritage Trail; such a study was completed in 1974 by the Department of Interior’s Bureau of Outdoor Recreation (this later was incorporated into the National Park Service). A 1983 amendment to the Act (77 Stat. 43, Public Law 90-543) designated the Potomac Heritage National Scenic Trail (’’the Trail") as a component of the National Trails System, recognized a corridor for the Trail, and assigned administration of the federal interest in the Trail to the Secretary of the Interior, which role is delegated to the National Park Service (NPS) to "enter into such agreements with landowners, States, local governments, private organizations, and individuals for the use of lands for trail purposes ...".

The Potomac Heritage National Scenic Trail spans close to 900 miles and is a braided trail network from the Laurel Hills Highlands Trail in western Pennsylvania to the mouth of the Potomac River. The trail spans five physiographic provinces and the Nation’s capital.

Today, the evolving Trail network is an enterprise of many partners, including government agencies at all levels, non-profit organizations, volunteers and commercial interests. The growing network provides opportunities for outdoor recreation, education and exploration between the mouth of the Potomac River and the Allegheny Highlands. Partnerships are at the heart of the Trail concept, creating a locally-managed, non-motorized trail network for outdoor recreation, education, transportation, health and heritage tourism.